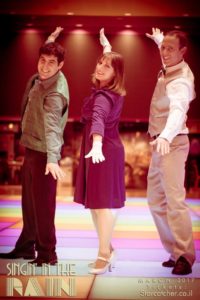 The Tapping Trio of Singin’ in the Rain

If the directors of Singing’ in the Rain (opening in Jerusalem on March 15) were simply looking for an actor who could “Make ‘Em Laugh”, they’d find plenty of options on the local theater scene. But with the role of Cosmo Brown requiring an actor who can crack jokes, sing like a star, tap dance like a demon, and play concert-level piano on stage, they knew there was only one guy for the job: Alon Aviv.

Israeli-born son of an American mom who teaches tap dancing, Alon has been hop-shuffle-stepping since he was in the second grade. He also had an early love for music, starting with clarinet (“that romance didn’t last very long”), and at 16, turned to piano. “I started out with a classical training, performing a piano recital for my high school matriculation exam. Since then I’ve focused primarily on musical theater, playing every piece of sheet music I can get my hands on,” he says. In addition to his on-stage appearances, he has served as musical director, and played in the orchestra for a number of productions. 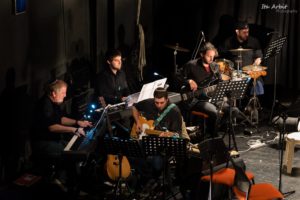 Alon on Keyboard in Starcathcer’s Rent

Like his tap dancing, Alon’s vocal training is grounded in the American experience. He has performed with two different barbershop quartets, drawing on his strong musical training to quickly pick up the harmony parts. And it was through barbershop that Alon–then serving as an officer in the IDF–picked up something even more important: the love of his life.

A chance announcement that a local theater company was looking for a barbershop quartet introduced Alon to Shani, then playing Marian the Librarian in The Music Man. The two have been a couple ever since, and have appeared together as the young lovers in The King and I, and as Belle and Gaston in Beauty and the Beast.

Alon’s life is not all song and dance; he works in a start-up company while completing degrees in Computer Science and History at the Hebrew University. But he always makes time for theater. 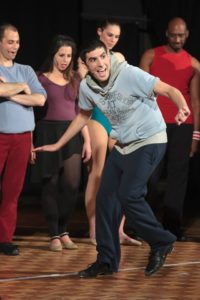 Alon’s first production with Starcatcher–the company producing Singin’ in the Rain–was A Chorus Line. In that show, he showed off his tap-dancing moves while belting out a number that could well serve as the anthem of the multi-talented performer: “I Can Do That.”

And in Singin’ in the Rain, Alon has the ultimate framework for bringing all his talents together. “I’ve known Singin’ in the Rain since I was five–we watched the movie version at home so often that I even knew some of my lines before the first rehearsal,” he says. “Having the chance to play the part of Cosmo Brown is a dream come true!”

← Movies, Mics, and the “Talkie Terror” of 1920 Meet the Rain Maker – Eli Kaplan Wildmann →
Welcome to the Starcatcher blog! Read all about our shows, actors, audition tips and more...