“My God, I hope it was the sound stage!”

According to legend, that’s what silent film star Clara Bow cried out back in 1929 when she heard that a fire had broken out on the grounds of Paramount Movie Studios. Whether the quote is true or not, there is no question that the transition from silent film to “talkies” challenged quite a few well-established careers.  This shake-up is what inspired the iconic movie-musical Singin’ In The Rain. 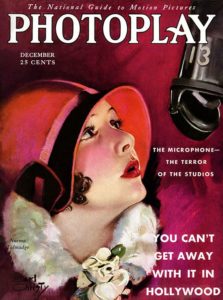 Now enjoying a new lease on life as a stage show, Singin’ In the Rain (playing in Jerusalem from March 15th to March 25th) pokes fun at the panic that occurred when the silent film stars’ secrets came out–for instance, that the cowboy made famous in “westerns” actually spoke with a thick German accent, or that the elegant British socialite actually had an accent straight from the South Bronx.

But on the other hand, the advent of talking pictures opened the door to big mouths–some of whom went on to become very big stars. The hyper-verbal routines of the Marx Brothers found a home in talkies.  Stars like Ethel Merman–whose huge singing voice had already hit the back rows of many a Broadway theater–reached new audiences.

Starcatcher’s Singin’ In the Rain teases out all the stylistic and comic potential of this cultural and technological transition. From the ARt Deco-inspired stage design (Eli Kaplan-Wildman), to the “roaring 20’s” choreography (Yaeli Greenblatt and Rachel Sofaer), to those Jazzy classic tunes (orchestrated by Haim Tukachinsky), to the cinematic splendor of “old time” movie clips created specially for this production, Singin’ in the Rain brings Holywood to Jerusalem.

← Singin’ in the Rain’s Queen of Comedy: Lauren Flaherty Who Ya Gonna Call to “Make ‘Em Laugh”? Alon Aviv, Of Course! →
Welcome to the Starcatcher blog! Read all about our shows, actors, audition tips and more...