When Aviella Trapido learned that she had been chosen to play the iconic role created by Debbie Reynolds in Singin’ in the Rain, she was instantly swept back in time. Not to the golden age of movie musicals exemplified by the 1952 film, but to her own childhood.

“I’ve always loved Singin’ in the Rain, which I remember seeing together with my parents before I was four,” she says. “I know I was that young because it was after seeing this movie that I demanded to be taken to dancing lessons–specifically tap dancing. I studied tap for 14 years.” 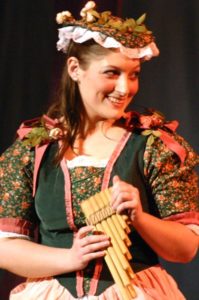 Aviella as Phyllis in Iolanthe (2005)

This early devotion to tap dance may come as a surprise to her fans in the local English-speaking community. A classically-trained singer, Trapido is a familiar face–and voice– from leading roles in a long string of productions from Broadway-style musicals, to operettas, to opera. Recently, she has added behind-the-scenes work to her repertoire, directing three different Sondheim musicals, as well as this year’s production of “Ordinary Days” – a musical presented at the Jerusalem AACI.

Trapido caught the theater bug well before she arrived in Israel. A professional child actress in her native South Africa, she toured with various productions. In fact, she was in line to play Cosette in the Cape Town production of Les Mis when her family decided to make aliya. The rest is history.

But for all her experience, Trapido is excited about the very specific challenge–and beauty–of Singin’ in the Rain.

“Playing opposite Assaf Berznitsky is such a treat,” she says. “He is the epitome of grace and elegance, and, in rehearsal, is simply beautiful to watch.” Berznisky is cast as silent movie-era star Don Lockwood, a role created for the original film by Gene Kelly. “Alon Aviv, the actor who plays Don’s best friend Cosmo, is also a tremendous dancer. Together we have enormous fun, and I’m sure the audience will too.” 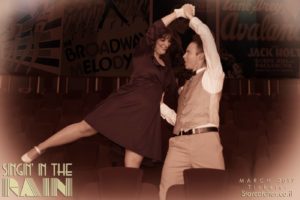 Trapido emphasizes that this show, co-directed by Yaeli Greenblat and Eli Kaplan-Wildmann, will be great post-Purim entertainment for the whole family.

“I fell in love with Singing in the Rain when I was a child. Jerusalemites of all ages will adore it too.”

← Meet Assaf Berznitsky the “Dancing Cavalier” ! Singin’ in the Rain’s Queen of Comedy: Lauren Flaherty →
Welcome to the Starcatcher blog! Read all about our shows, actors, audition tips and more...