From his introduction to ballet at the age of five, to participating in the creation of a film about Tchaikovsky’s “Nutcracker” in third grade, to performing around the world with “Hora Jerusalem” for over a decade – Assaf Berznitzky’s life has been one long love affair with the world of dance.

Soon, he’ll be sharing his “Gotta Dance” sensibility on the Jerusalem stage, by stepping into Gene Kelly’s iconic role of Don Lockwood in Starcatcher’s upcoming production of Singing in the Rain.

“Being in this production is like the fulfilment of a dream,” says Assaf, who followed up academic studies in psychology, drama and drama teaching with training at Nissan Nativ’s Actors’ Studio in Jerusalem. “There’s nothing like taking on a role that uses all your skills – in acting, in singing, and of course, in dance!” 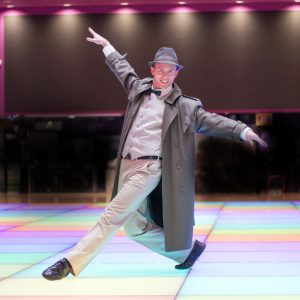 Assaf has been a member of the professional theater company Aspaklaria for six years. In addition to the musical theater experience he gained while still a student at Jerusalem’s Frankel School (“A very special place – please give a shout-out to my teachers Miri Chacham and Yitzhak Rosenbloom!”), Assaf recently appeared as the Cat in the Hat in “Seussicle” and in the Jerusalem cast of “CATS”.

A busy director and theater teacher, Assaf is also in demand as a choreographer, and finds it rewarding to be on the “receiving” end, breathing life into the choreography created by his colleagues. “Our director, Yaeli Greenblatt, who is a trained dancer, is staging the dance numbers together with Rachel Sofaer, who specializes in tap,” he says. “All in all, this show has a level of dance sophistication that is really fabulous. It shows off everything I can do!”

Assaf shares star-billing with Aviella Trapido (who steps into the role of Kathy played in the original film by the late Debbie Reynolds) and Alon Aviv (who plays Cosmo, the stark-raving sidekick immortalized by Donald O’Conner). It turns out that both these actors are old hands–er, that is, feet–at tap dancing as well. Asked if he will really be singing in the RAIN, Assaf smiles and strikes a dancer’s pose: “Let’s put it this way: this show is going to make a big splash!”

Singin’ in The Rain opening March 15th. Buy your ticket today at starcatcherjlm.com

← Tickets for Singing in the Rain — on sale now! Tap Dance Secrets of Jerusalem’s Favorite Soprano →
Welcome to the Starcatcher blog! Read all about our shows, actors, audition tips and more...