And finally… we are proud to introduce the talented performers who will be bringing Spring Awakening to life here in Jerusalem. Listed here with some info on each, you will be seeing them on stage in March.  For now, here is your virtual introduction…. 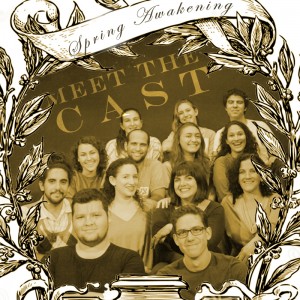 See you at the theater!

Marni Schamroth (Anna) – Marni is a student at Midrashat Be’erot Bat Ayin. She was previously a teacher in sherut leumi and a student at the School of Visual Theater. She’s appeared in multiple productions including videos that ‘went viral’, West Side Story (Velma), Spelling Bee (Olive), Hairspray (Penny), and A Chorus Line (Kristine). Marni’s thrilled to be back on stage where she belongs!

Tal Schwerd (Thea) – is currently a music student at Midrasha Emunah VeOmanut. She has performed in 9 shows in Jerusalem, most recently as Natalie Goodman in Next to Normal. Her previous credits include Starcatcher’s Rent (ensemble), Beit Hillel’s Beaty and the Beast (Wardrobe) and Jtown playhouse’s Second Star to the Left (Mulan). She wishes the cast an unforgettable run.

Ayelet Kagan (Ilse) is 22 years old and a student at the Jerusalem Academy of Music and Dance, studying classical voice. She has sung with the Ankor youth choir and is currently part of the Academy’s Chamber Choir with whom she recently performed on a tour in Germany. Ayelet played the role of Juliet in Theater in the Rough’s “Romeo and Juliet” in 2011 and this is her first Jerusalem musical theater production! She is very excited to be playing the role of Ilse since it has been her dream since she was introduced to Spring Awakening when she was 16.

Rebecca Sykes (Female Adult Roles) – Last seen in Guys and Dolls (Adelaide), Rebecca also appeared in The Sound of Music (Baroness), Man of La Mancha (Aldonza), Wizard of Oz (Glinda) and Company (Joanne). She can be found around town singing jazz with Ofer Golany (www.jerusaleman.com), and can be heard on his new CD, Kaf.

Coren Feldman (Moritz) – After a 4.5 year hiatus from theater, Coren hit the road running, playing Mark in RENT, Gabe in Next To Normal and now Moritz, all in the past year. Spring Awakening is Coren’s 10th show in the Jerusalem English-speaking theater community. Outside of theater, Coren’s passions include music, hi-tech, making comedy videos nobody watches and the word sesquipedalian.

Daniel Lewin (Georg) is beyond thrilled to be making his Jerusalem debut in Starcatcher’s Spring Awakening! He comes all the way from Johannesburg, South Africa from studying 2 years of Drama at Oakfields College. His first show was in High School doing Grease (Doody/Teen Angel), and several College plays but too many to name. He currently lives in the Old City and will be making Aliyah within next year. Daniel dedicates his debut to his late mother, who passed away a year ago and is proud to do what he loves in a country that he loves!

Dor Attias (Melchior) – is a medical student at the Hebrew University, currently completing his rounds in pediatrics. This is his first performance in musical theater and he is so glad to be doing it with this amazing show and such an incredible cast.

Idany Saadya (Ernst) is part of a Zionist-socialist commune of the elder movement of Hanoar Ha’oved Ve’halomed. He is an educator, and a graduate of theater studies at Shazar High School, Bat Yam. Idani runs a youth group and performs as a drag queen around the country.

Maya Cohen (Wendla) – is currently an MA music student at the Jerusalem Academy of Music and Dance under Mrs. Anat Efraty and Dr. Ido Ariel. Her performances include the JAMD’s production of Sondheim’s “Into the Woods” as Cinderella, Encore’s production of Gilbert & Sullivan’s “The Gondoliers” as Tessa, and their production of “The Sorcerer” as Aline, the AACI’s production of Sondheim’s “A Little Night Music” as Anne and Yemima in Marc Lavry’s opera “Dan the Guard”. Spring Awakening is a musical that Maya holds dear to her heart and is very thankful for the opportunity to take part in it. It is her first Starcatcher’s production. Also, she would like to state than in her free time she insists on wearing dresses that make her feel like a little fairy queen.

Rachel Frazin (Martha) –  is 23 years old and made aliyah from California last year. She is ecstatic to be in another amazing production with Starcatcher! Her previous roles include Mimi in Rent, Katie in Second Star to the Left, and Val in A Chorus Line. Spring Awakening is such a meaningful show and she feels privileged to sing, not only in this production, but in spring, summer, and autumn as well!

C.B. Davies (Hanschen) – studied at the American Academy of Dramatic Arts, Terry Schreiber Studios, and in the one year conservatory at Michael Howard Studios in NYC. Past roles include Uncle Vanya (Telegin), The Mouse That Roared (Beston), Picnic (Howard), Remember My Name (Hans Schmidt), and most recently as Henry in Next To Normal here in Jerusalem. He is very excited to have the opportunity to work with an amazing cast and crew in Spring Awakening. Thank you Dena for being there with me while I take part in these amazing and meaningful journeys onstage.

Rebecca Fox (Clara) – is 18 years old, and temporarily living and working in Jerusalem before going into the army a few days after closing night. Rebecca’s background is primarily in dance. Previous Jerusalem community theatre productions include A Chorus Line (Starcatcher and Encore!), Beauty and the Beast (Beit Hillel), and RENT (Starcatcher). Rebecca is happy that Spring Awakening of all shows gets to be that special last one before her military service.