If you attended one of the performances of Pippin you know the show is full of magic tricks, metaphors, and symbolic objects. We packed the show with beautiful colorful moments, but with so much going on at once, did you manage to catch these smaller details?

If you haven’t seen the show yet, here are some things to watch out for (get a stage seat right at the front for the closest look)

Cellist/Player
One of the players in our troupe, the ever so talented Elinor Kaufman, not only dances, sings, and acts (most prominently as the unfortunate petitioner peasant) but also doubles as a member of the band, playing the cello. Talk about quadruple threat!

One big family
Did some of our actresses look oddly similar to one another…? Unless you read the program carefully (or know them personally) you may not know that Rebecca Sykes, our leading player, is the proud mother of Mira, playing queen Fastrada, and Amalya, our upside-down acrobat player. They join Starcatcher’s grand tradition of family lineage which also includes Jeff Rosenschein our musical director, and his daughter Elianna our extraordinary stage manager. 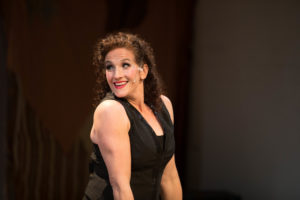 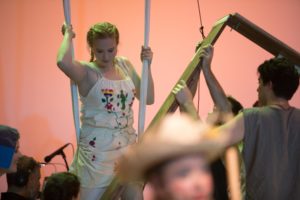 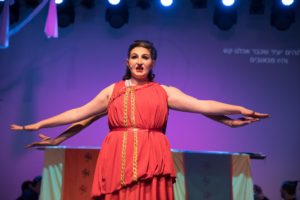 The Four Elements
The first part of the song ‘with you’, describing Pippin’s experiance of being infatuated (“sex presented pastorally..”), features four soloist dancers, each representing one of nature’s elements – earth, fire, air, and water, with their costumes color coded to match their element, and their movement inspired by the different characteristics. 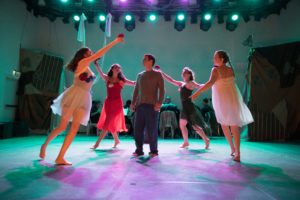 Puppet on the loose!
In the opening of act 2 (also known as the entr’acte) the circus elements of the show are in full swing. In addition to jugglers, hoola hoops, and acrobatics, did you catch one of our puppets going rogue and riding a unicycle..? That’s one talented puppet..

“A Duck belongs in a pond..”
In act 2, a miniature version of the farm appears as a pop-up book, made by the amazing Rachel Jacobson, complete with a little duck sitting in a pond.
This is actually one of several miniature models featured in the show such as in ‘the story of Pippin’, the Finale, and of course in the puppet segment.

The Puppet King
…and speaking of Puppets! If you got a close look at theses wonderful creation (again, courtesy of Rachel Jacobson) inspired by ‘Punch and Judy’ puppet theaters, you may have noticed that the puppets resemble their operators in their features and costumes. The little king puppet even has a mini replica of the crown worn by king Charlemagne in the show. 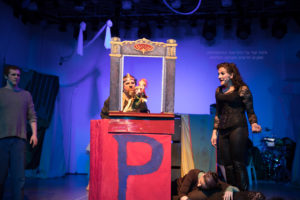 The Crowns
The main characters of Pippin are the royal family which means there are lots of crowns worn onstage. The show actually features four crowns (designed by Aharon Manor) made out of four different materials, each connected to the character wearing it. King Charlemagne wears a crown with wooden spikes, emphasising his connection to weapons of war, queen Fastrada’s crown is made out of metal (beautifully adorned but cold and sharp), while at the end of Act1, Pippin is given a knit crown made of wool (warm and malleable). The last crown, prince Lewis’s, appears in ‘Spread a Little Sunshine’, and is a fake plastic toy… Which was your favourite crown? 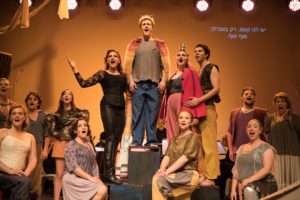 Themed Make-Up
Pippin being such a theatrical show, our talented make-up team (headed by Dena Davies) went all out giving each actor their own style. Many of the players have celestial symbols, reflecting the important theme of the blazing/glowing/setting sun that features throughout the show.

Players on the side lines
When not busy singing and dancing in a scene, our players sometimes sit onstage watching the rest of the show. This is not just to let them enjoy their friends performing but is an important part of the play within a play element of Pippin, and the breaking of the 4th wall. The story of Pippin is performed by the players for their own amusement, as well as for the rest of the audience. Watching them watching the show, we can never forget that we are in a performance. Until we do…

Quack!
A mysterious quack sound comes from the band as Theo and Otto enter in act2. Was that you Jeff Rosenschein…?

← Where does Jeff end…and Pippin begin? Meet the Cast of In the Heights →
Welcome to the Starcatcher blog! Read all about our shows, actors, audition tips and more...